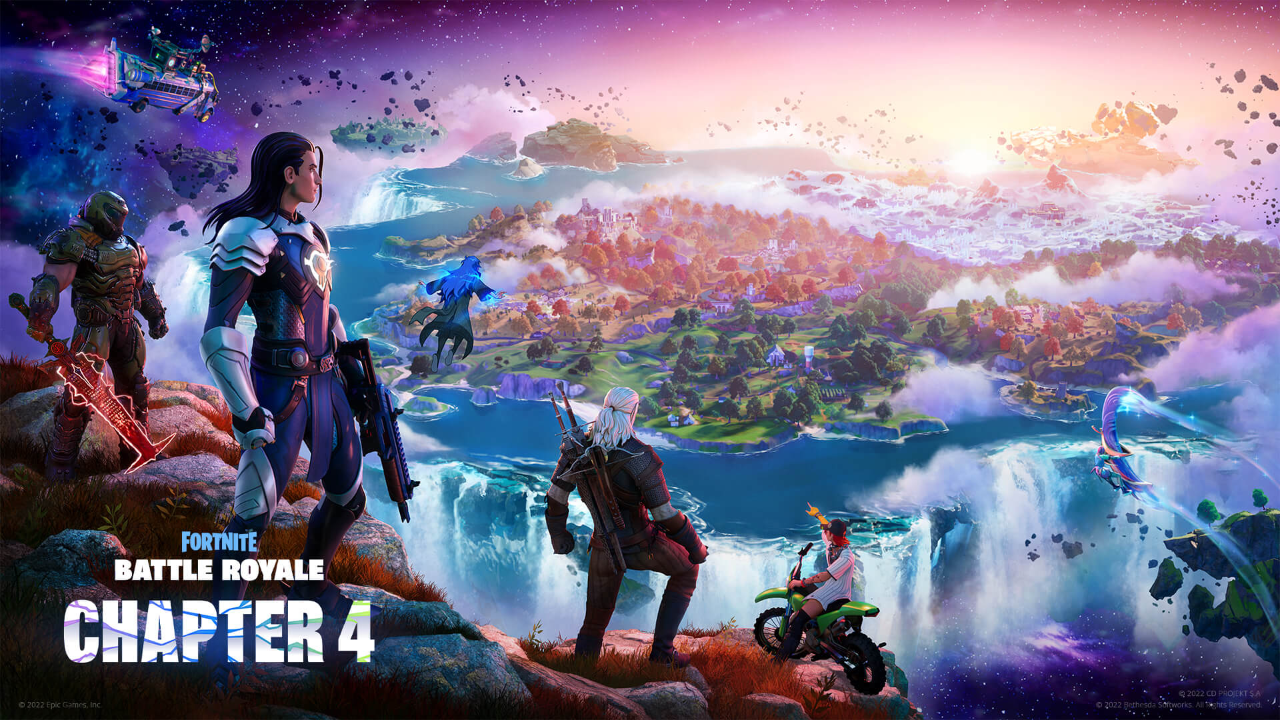 In the fourth Chapter of Fortnite’s Battle Royale, go forth in a new realm and get around in new ways — ride a dirt bike, roll in a snowball, launch yourself with the Shockwave Hammer, and hurdle over obstacles. Power yourself up with Reality Augments and claim territory for your squad, leaving behind Banners to declare what’s yours. And of course, venture with newly-forged weapons.

The New Island: Your Domain... But Also Your Enemies'

After the events of Chapter 3’s finale, a new Island has formed. Here are just some of the sights you’ll encounter in this realm:

This headquarters of the Reality Warriors is located among the snowy mountains. Speaking of snow, hit snow with your Pickaxe to create a snowball, jump inside the snowball, then get rolling. You can attack enemies this way too…

One of the many ways to get to these places? The trusty, two-wheel Trail Thrasher. Perform tricks on this dirt bike and use weapons as you ride.

Fortify Yourself with Reality Augments

Don’t like your randomized options? Reroll them for another chance at your faves, or maybe one you've never chosen before. Mix and match Reality Augments and find your favourite combo to support your next Victory Royale!

Go Forth by Hurdling Forward

If you sprint at obstacles, you'll now hurdle over or onto them. Use this slick maneuver in your pursuit of victory.

Seize a New Slate of Weapons

Venture with a fresh set of weapons on the Island. You’ll see returning ones too, but here’s a rundown of what’s new:

The weapons above aren’t the only new items. In addition to returning healing items, restore yourself with new ones:

Shoot for the Spoils

Speaking of things in the air, certain points of interest (POIs) at random will be dubbed Hot Spots at the beginning of the match. (Look for the POIs with gold text on your map!) These POIs are filled with flying drones holding high-rarity weapons — shoot down as many drones as you can and revel in your fortune.

Conquer with your squad. Stay in a POI’s Capture Point long enough and your team’s Banners will be put on display, marking your team’s control of the POI. In a POI your squad’s claimed, Chests and opponents will be marked. Just watch out for anyone who tries to claim it first…

We're covering everything new in Chapter 4 live on Twitter (@FortniteBR)