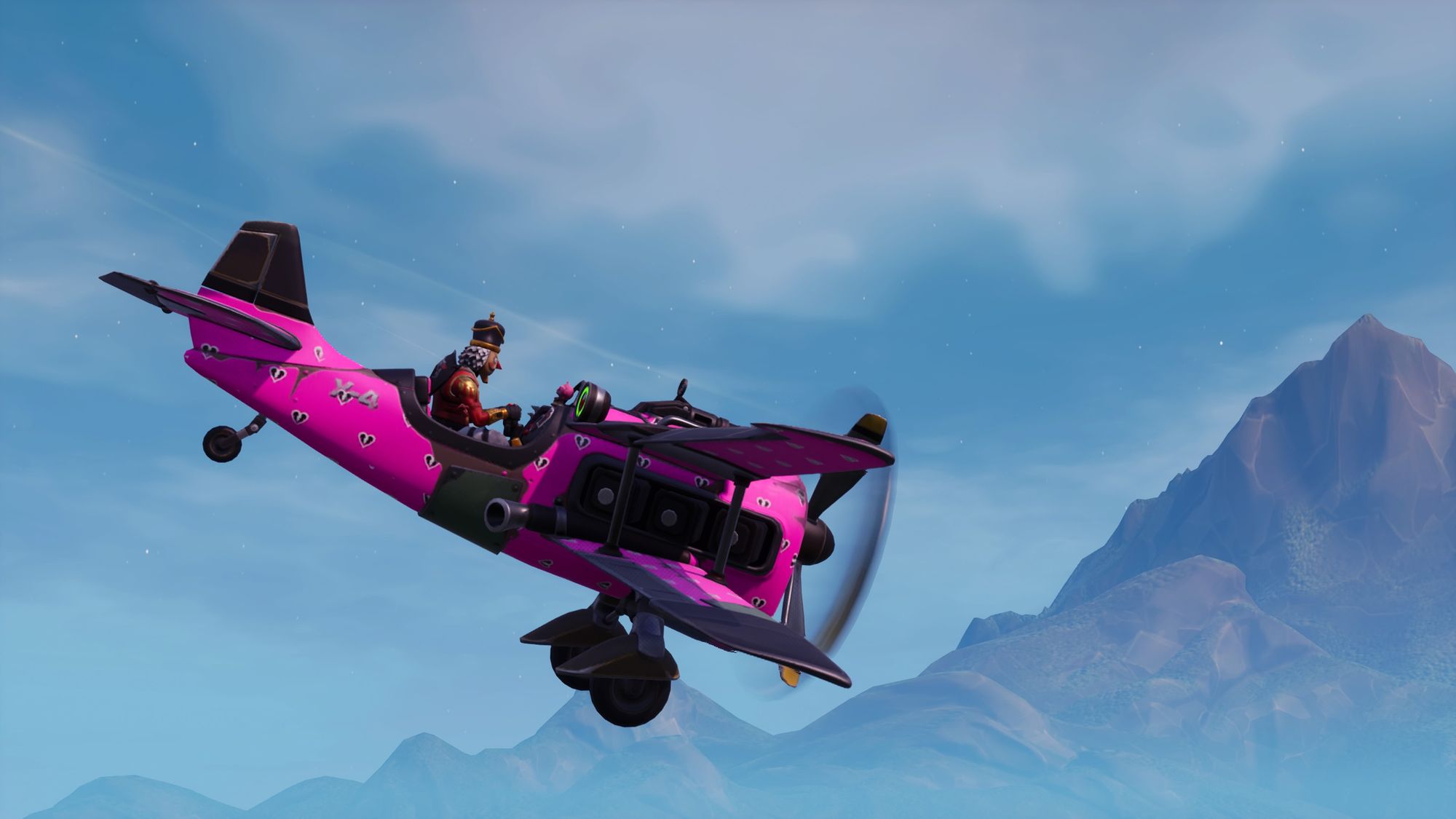 The AMA is now concluded. Here are all the answers:

Are clingers getting changed at all?

8.00 has a fix for the issue where you'll take damage from your own clinger through walls if you're within the explosion radius.

I’m an audio engineer so I’ve always been curious how you do your audio. Is all the Foley recorded in house? How big is the team?

There are around 20 audio designers and engineers at Epic. We use a mixture of in-house and external foley and sound effects, and make all our own emote music. :)

How long do you guys playtest a weapon before adding it to BR?

Do you mean before or after release? ;-)

Nothing matched the chaos and awe inspiring moments of the Rocket for me personally! But gotta say I love keeping it Mello.

Are there any plans to reintroduce the storm damaging structures? I have always thought that slow continous damage to structures in the storm would be

Not at the moment, it didn't end up playing out as well as we wanted.

Has the development of Fortnite lead to new features or fixes in Unreal?

We did a GDC talk about this last year and the improvements have been ongoing.

Any progress on the middle east servers yet?

We are currently working with multiple providers, but realistically this is going to be a bit out still.

We've talked about it. Think there's value here but it needs time and we want to make sure we do this right. We're not committing to anything here but know we're thinking about it.

how do you guys react to all the “bring back ___” tweets?

Only OGs appreciate the “bring back ___” tweets

Do you guys miss prison as much as i do?

Do you have any plans to bring back bouncers?

Not at the moment.

Why is it when I farm a brick wall it gives me wood?

Not all things end up resource tagged perfectly. Sounds like a bug we should address.

Have you considered any improvements in team communication? Currently, it's not very effective. Also you have to stand still to use squad commands. At least let us use the commands while moving

There are some improvements coming in Season 8 that will help with map markers & team communication, and we're always mindful of how we can make these areas better.

Does Epic still use AWS?

why cant the Net UI display the actual ping?

We have a lengthy technical blog coming up on the topic. The quick summary is that there are two measurements of latency worth considering.

There is internet latency and what we want the ping to display. This required some changes to our code to accurately factor out client and server frame times.

The other is client / server roundtrip that takes framerate into account and is a measure of latency of action to reaction. It gets complicated quickly as we are able to do some tricks to reduce this below that number for certain actions.

What’s the best thing about working at epic games?

I’m around super inspiring people all the time. Truly learn something new every day. We move fast and are always innovating and doing wild stuff.

Are you planning on keeping the drift board or will it just be a limited time thing?

We're working on a new single-occupancy vehicle and aren't quite sure how they'll play together. The Driftboard's reception has been really positive though, so we're actively discussing how long it should stick around.

Will the building in Tilted ever be safe?

🤷‍♂️ - Is anything ever really safe?

Is Zapatron returning to BR in a near future??

will you fix the email system so i can complete 2fa?

We recently had three distinct issues with token delivery latency via email and are taking steps to ensure this is not a recurring theme. We are working on additional mechanisms for token delivery. Currently supported are email and Google Authenticator.

Do you have a persistent issue with 2FA?

Are there any plans for a 'classic' mode? For example:

We tried to capture this vibe with our Unvaulted (Soon to be renamed Classic) LTM. We enjoy having the limited and old item set. It’s unlikely that we’ll have this available with the old map and old tuning values but glad folks are enjoying the LTM when it’s around.

Is there any plan to add saved outfits presets in the locker?

Not currently slated for any timeframe but it is a cool idea.

I'm afraid that is not in the cards. Same goes for client-side replays, but we have efforts going towards server side replays.

Is double shotgun ever going to be brought back?

We do not have any plans to bring back the double shotgun. The main issue is that the high damage of the weapon is balanced by its slow rate of fire, and bypassing that weakness makes it too powerful.

Do you ever intend on slowing down the game in terms of mobility?

We’re always evaluating availability of different items, including mobility. Our goal is to have a healthy mix of all item types without overdoing it in any one area.

We’ve been considering this mechanic for a while and have been exploring it. Want to make sure we give it the time it needs and fully understand its impact on the game as a whole. Look for further updates during Season 8.

Will the “Getaway LTM” ever come back?

All LTMS have the potential to come back.

will you been improving the late game fps in things like pop ups, scrims, and customs?

There are both short and long term efforts to improve server performance during late game competitive settings. Engineering efforts aside, we are also looking at upgrading the hardware used for this purpose.

Will planes be gone next season?

Planes will be vaulted at the start of Season 8. Get your airtime in now!

Any plans to change the shoulder bone of Ragnarok to the other hand?

Within Season 8 we plan to have some solutions in place for this.

How long does it typically take to think of an outfit and to design it before it arrives in game?

Are there any plans on bringing back old, popular POIs such as Risky Reels? (or even unnamed ones)

Any plans for new server regions?

We are working with various providers on finding a solution for MENA.

Could you add the option for all consoles (including Nintendo Switch) to lower graphic settings and removing things like motion blur and shadows?

A: We are adding an option to disable motion blur (off by default) in Season 8.

Disabling shadows currently provides a gameplay benefit. This is not our intention and we are tweaking the way shadows are rendered to both brighten them and also make characters stand out better. This is going to be an ongoing effort starting with v8.0 and we will evaluate other options if this doesn’t end up working.

If you complete 13 overtime challenges, you get the battle pass for free & it’s originally 950 vbucks, will we have the option to purchase the bundle if we want to? and will it be full priced if we’ve already earned the free pass. Thanks!

A: We believe the key pillars for competition are:

Pop-up cups are a first small step in this direction, expect lots of iteration.

Do you intend on improving the gameplay sound?

A: In the last few weeks we've started reviewing our gameplay audio and found there's a lot of room for improvement. Season 8's update will contain:

What is the reason for not separating SEA servers? We have to play on 150 ping in pop up events

A: We are hosting our Asian servers in Tokyo and Singapore.

The majority of players in the general region are best served by our Tokyo data center, and we dynamically route players to Singapore if there is a sufficient enough population that benefits from this location.

Generally, this allows us to more dynamically deal with fragmentation as platform * playlist * region results in a lot of buckets and regional populations swing by as much as a factor of 30-40 between daily peak and valley.

Having said that, we recently made some changes to our matchmaking wait times to help improve the experience of players with a better connection to our Singapore data center and have some other changes in development to further improve the situation. We are aiming for them to land in March.

Can you add a button to the item shop to confirm purchases, to prevent accidental purchases?

A: We are working on ways to eliminate accidental purchases. In the meantime, we have a refund token system to help.

Who has the most wins at Epic Games headquarters?

What was the hardest location to replace/get rid of?

A: Dusty Depot since that was the first time we had to make the decision to take the plunge and change something at a larger scale. Generally everything we change has a bittersweet aspect to it for somebody.

Just one word for season 8?