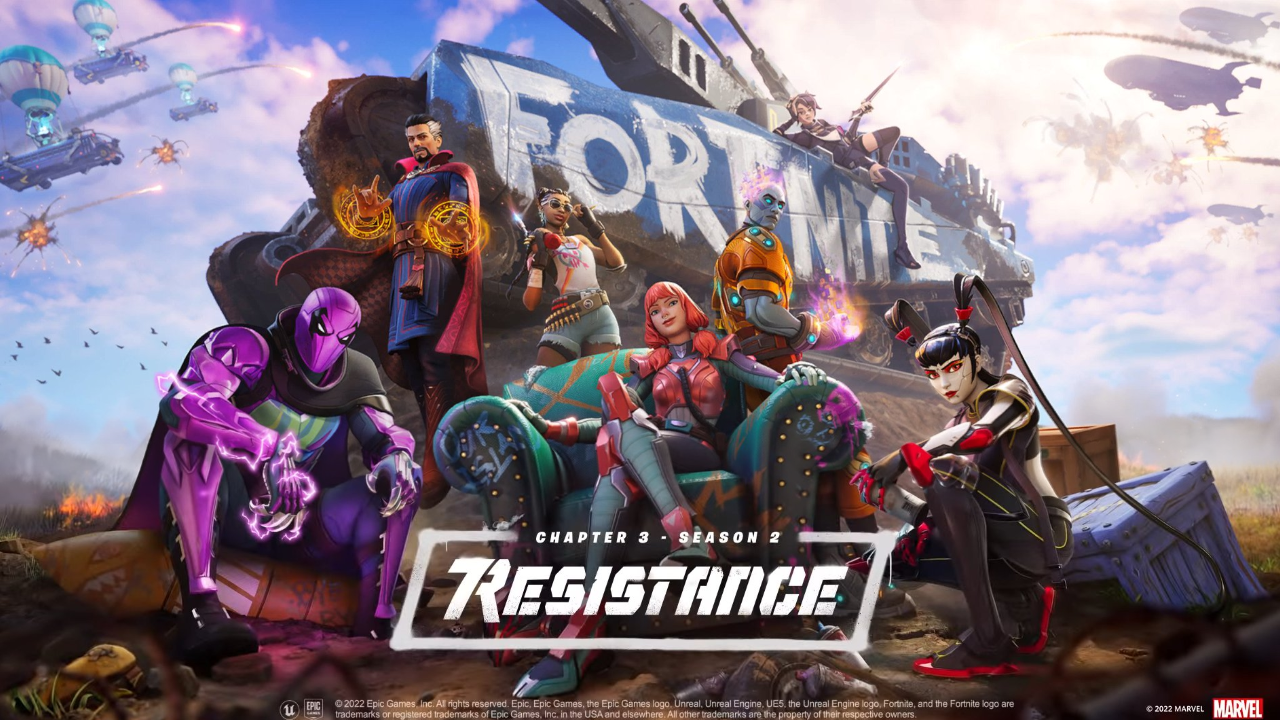 Fortnite has released the second major seasonal update of Chapter 3, introducing a number of new additions to the game. Welcome to Chapter 3 Season 2: Resistance.

Not only has Season 2 removed building, but it's also introduced new ways to bring the fight:

Gaining the high ground has always been key to winning a battle. And fortunately, where your feet fail, your hands will now help you out. If a surface is just a little too high for your jump — or a platform just a little too far for your landing — your hands can come into play and pull you up!

Players can now sprint at doors to bash them open with their shoulder. The Slide feature (introduced last season) can also be used to open doors.

As the Season progresses, players will have new opportunities to help direct the Resistance. Bars can be donated to pro-Resistance devices, as well as being used to vote for which items Epic should unvault.

To introduce the Season, a different form of vote is live right now. Instead of an item unvault vote, it's a for Turret devices. Different pro-Resistance sites need help deciding whether to install a Light Turret or a Heavy Turret. With the former, get the classic Mounted Turret experience. With the slower but beefier latter, do heavy damage to vehicles. The first site that needs help is Sanctuary!

Season 2 has also introduced another way for players to contribute their Bars right away: funding the Armoured Battle Bus.

The Armoured Battle Bus features Chonkers Tyres, a Cow Catcher (new in Season 2) and both versions of the new Turrets. Once 100% funded, the bus will immediately become available in-game at Resistance-occupied locations.

A wide slate of weapons have been introduced today, here's all the new items that can currently be found in-game:

Like the Combat Assault Rifle and Combat Pistol, the Combat SMG packs a heavy punch. Tame its recoil to get the most out of its exceptional power.

The Striker Burst Rifle is a burst-rifle with a customized sight. Strike with this two-shot semi automatic weapon as you aim with the scope!

The following weapons have been unvaulted in v20.00:

The following weapons have been carried over from the previous Season:

The IO having a bird’s-eye view of the Island may seem intimidating, but you can still access their blimps from the ground. IO Blimps are attached to the ground via Ziplines, so zip up to an IO Blimp and claim its loot for yourself! How do you get back down? Either use a Zipline, use the draft of a fan to begin gliding, or launch yourself with a Siege Cannon.

The IO have also introduced their own set of new weapons to the Island:

Fire the Titan’s cannon while you drive, and if you wanna be even more formidable, have a teammate control its machine gun turret.

IO Titan Tanks have a massive amount of Health, but their treads can be destroyed if they take enough damage. If this happens, fix ‘em up by hand or with a Repair Torch! The Titan’s a tough battle-tested machine, so what to do if you’re up against one? Deal enough damage to the engine (located at the rear) to temporarily overheat its systems. This is a prime opportunity to take on the treads!

Need to get somewhere fast but the path’s too perilous on foot? Get in the seat of a Siege Cannon and launch yourself far forward. (Or launch your teammates first, then yourself.) Mid-air, you'll be given the option to deploy your Glider, but you won't take fall damage if you don't deploy it.

You can still have fun with a cannon even if you don’t have travel plans. In addition to using them as a transportation device, keep your opponents at bay by firing projectiles!

Chonkers Off-Road Tyres have been used to make cars offroad since Chapter 2 Season 6, but this fight against the IO calls for more modification. Available now, throw a Cow Catcher on your Joyride vehicle to boost its ramming power! (Blockades and other vehicles beware.) Throw a Cow Catcher and Chonkers on the same vehicle for the ultimate expedition.

Whether your Mudflap’s been subject to explosives, your Motorboat’s been running too long on land, or your Titan’s been targeted at the treads, fix it up with a Repair Torch! Repair Torches restore the Health of vehicles, and if they run out of fuel to ignite? Fill ‘em back up at a gas pump!

Building is unaffected in competitive/Arena playlists as well as in Team Rumble and Creative Islands.

What do you think of the new Season so far? Let us know by reacting below!