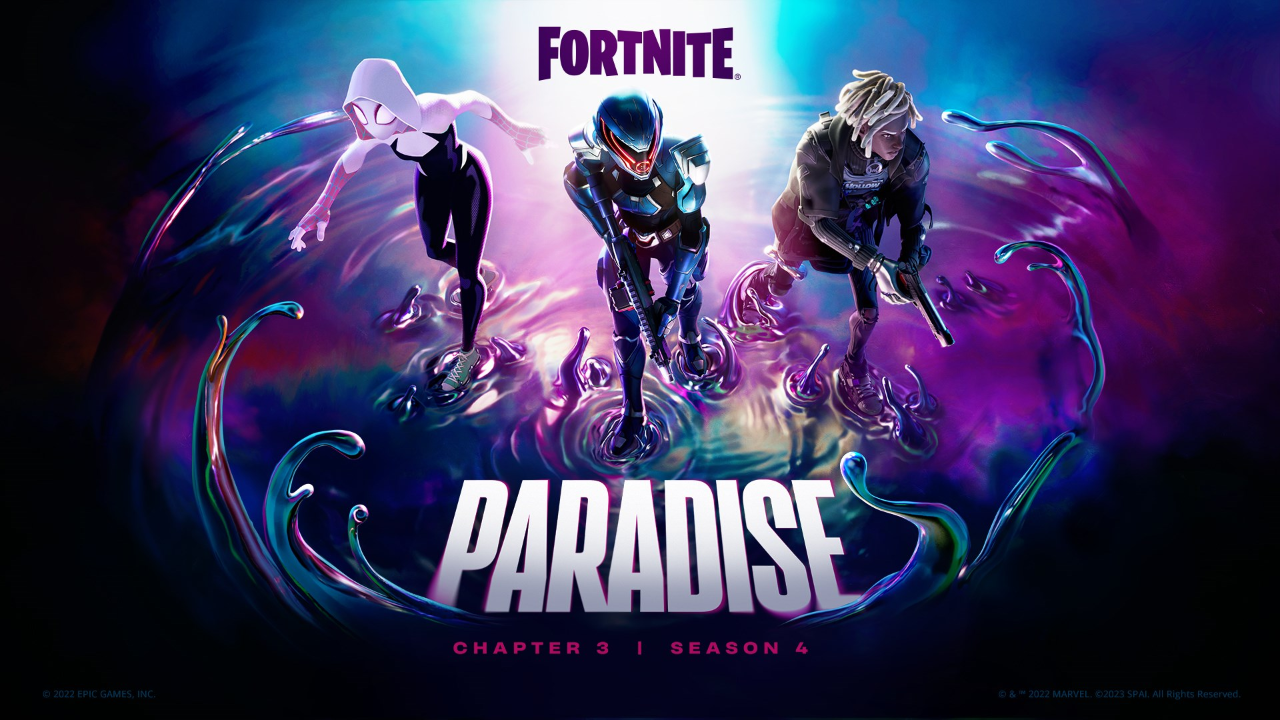 Fortnite has released its fourth major seasonal update of Chapter 3, introducing a number of changes to the game. Welcome to Chapter 3 Season 4: Paradise!

In Fortnite Chapter 3 Season 4: Paradise, a mysterious substance has appeared on the Island. Chrome will consume all, Chrome will be all. Embrace the Chrome by turning structures Chrome, making yourself Chrome, and proving the power of Chrome weapons.

Not even wood, stone, brick, or metal is a match for Chrome. An enemy built a structure for defense? Throw a Chrome Splash at the walls to make the walls penetrable — jump right through the building and get the drop on your opponent!

The Best Shape of Your Life

You can’t beat it, so be it: throw down a Chrome Splash to Chrome-ify yourself. You’ll be pure Chrome for a limited time, meaning you’ll be immune to fire damage and… become a Blob when sprinting. But don’t let this bulbous form fool you. While Blobbed, you'll move faster, be immune to fall damage, and gain the ability to air dash. Dash into any building piece to Chrome-ify it then phase through it!

Chrome’s not only taking over points of interest, it’s built a brand new one. Ascend Herald’s Sanctum (near the abandoned Sanctuary) and stand atop this tower of honorable and hexagonal foundations.

A New Kind of High Ground

In their fear of Chrome, some Island locations are seeking “safety” in the air — most notably Condo Canyon. Now called Cloudy Condos, attack from above in this expanding POI. One way to get up there? Use a D-Launcher, available in different places on the Island to help you gain higher ground.

Chrome’s introduction caused the creation of the EvoChrome Shotgun and EvoChrome Burst Rifle. Find these weapons from Chrome Chests, then see their rarity increase the more you damage opponents with them. Take ‘em from Uncommon to Mythic!

Weapons Before The Chrome Era

Some pre-paradise things are alright… Use strategies from yesteryear with unvaulted weapons and returning Vibin’ weapons:

Speaking of weapons, Sniper weapons across the board (including ones still vaulted) have had their damage and their headshot multipliers increased. Expert marksmen and trickshotters rejoice, because now one shot could be all it takes to send someone back to the Lobby. Keep your head on a swivel and — if your aim is on-point — one-shot opponents with certain Snipers once again. (Even in Zero Build!)

Becoming Chrome isn’t the only way to unlock your potential. There’s a good chance you’ll come across Keys on the Island — use them to open Vaults containing loot! Low-Security Vaults require one Key to open, while High-Security Vaults require two (for the reward of more items!). Where to find this locked loot? After collecting one or more Keys, you’ll see keyhole signs on your map to help you out.

Under assault from enemies? Deploy potent cover fast with a Port-A-Bunker, taking the place of the Port-A-Fort this Season. Throw down the Port-A-Bunker to create an instant 1x1 structure featuring reinforced metal walls, a versatile ramp, doors, and defensive tires to bounce away would-be-invaders — no building required!

You'll now knock back opposing players when sliding into them!

Starting this Season, players who use restricted devices that provide, or are intended to provide, a competitive advantage may receive an in-game warning. To continue playing, players must remove the hardware and restart Fortnite. Attempts to bypass this restriction will result in a permanent ban from Fortnite. Restricted devices include but are not limited to Cronus Zen and Cronus Max.

In other news, SypherPK has joined the Fortnite Icon Series. Click here to read more.

Rambunctious Emote Removed from the Item Shop after One Hour